The Society of Saint Paul SSP

The Society of Saint Paul is a religious congregation which was founded in 1914 at Alba, in Italy, province of Cuneo, by Fr. Giacomo Alberione.
Its members are known as the Paulines. Faithful to the mission assigned them by their founder, they communicate the Christian message with the use of all means that technology put at the disposition of modern man. They are present in 32 countries around the world. They are active in many fields: editorial and bookstores, journalism, cinematography, television, radio, audiovisual, multimedia, telematics; centres of studies, research, formation, animation.
Their logo represents well the dynamism which fills them.
The General and the Provincial Government, assure that the mission comes to life. Father Giacomo Alberione, in the footsteps of Saint Paul to become one for all, has, besides the Society of Saint Paul, founded four congregations:
• the Daughters of St. Paul,
• Disciples of the Divine Master,
• Sisters of Jesus Good Shepherd,
• Sisters of Mary Queen of Apostles;
four associated institutes:
• Jesus the Priest,
• Saint Gabriel Archangel,
• Mary Most Holy Anunciation,
• Holy Family;
as well as the Association of Pauline Cooperators.
Together, they constitute the Pauline Family.

APPROVAL:
The SSP was approved officially by the Holy See on 27 June 1949. Its mission is to "evangelize with the modern tools of communications". It is made up of religious priests and lay consecrated (called Disciples of the Divine Master). They are present in five continents. The Society of St. Paul makes use of magazines, books, cinema, radio, television, discs, casette tapes, compact disc, internet and all technological means of communication to announce Christ and speak of everything in a Christ like manner to all those away from the parish life. The models of the mission are: Master Jesus, Saint Paul, the apostle who became one to all, and Mary Queen of Apostles who gave life to Christ, communicator of the Father.

These are the words of Paul VI on 28 June 1969. Father Alberione had been received in audience with representative sisters and priests of the Pauline Family on the occasion of the second General Chapter of the Society of Saint Paul.
On this occasion, the Pope granted to the founder and the Pauline Family the cross "Pro Ecclesia et Pontifice". Two years later, in late afternoon, on 26 November 1971, Paul VI visited Fr. Alberione on his death bed.
He died that same day at 18:30. His last words that he left to his sons and daughters, as his spiritual testament are an invitation for hope: "I die... I pray for all, Paradise!".
Important moments of his life:
1884, 4 April – James Alberione was born in San Lorenzo di Fossano (Cuneo), Piemonte, North of Italy.
1890-1891 – Starts primary school in Cherasco (Cuneo) and a year after said to his teacher: "When I grow up I will be a priest".
1896, 25 October – Enters the seminary of Bra (Cuneo). He leaves it in April 1900.
1900, October – Enters the seminary of Alba (Cuneo). He is directed by Can. Chiesa.
1900, 31 December – During the noctural adoration in the Cathedral of Alba "he feels obliged to do something for the people of the new century".
1907, 29 June – He is ordained priest in Alba. He finishes theology, and after a brief ministry in Narzole is nominated Spiritual Director of the Seminarians.
1912 – Starts to publish the magazine “Vita pastorale”.
1913, 12 September – Assumes the direction of the weekly “Gazzetta d`Alba”.
1914, 20 August – Opens the “Little Workers” Typographical School, the future Society of St Paul (SSP), with two young boys: Desiderio Costa and Torquato Armani.
1915, 15 June – Founds the Pious Society of the Daughters of St Paul (FSP).
1917, 30 June – Founds the Union of Cooperators of the Good Press (today the “Association of Pauline Cooperators”).
1921 – Birth of the “La Domenica”, periodical which he calls the “Assistant Parish Priest on Paper”.
1924, 10 February – Founds the Pious Disciples of the Divine Master (PDDM).
1924, 1 October – Begins to publish the magazine “Il Giornalino”.
1926, 13 January – Sends Fr Giaccardo to found a community in Rome. .
1927, 12-13 March – Canonical erection of the Society of St Paul and Religious Vows of Fr Alberione in front of the Bishop of Alba, Msgr. Francesco Re.
1931 – First Pauline foundations overseas: Brazil, Argentina and the United States.
1931, 25 December – Birth of the weekly “Famiglia Cristiana”.
1932, 15 August – Start of the magazine “La Madre di Dio”.
1936, July – Fr. Alberione transfers definitely from Alba to Rome.
1938, 7 October – Founds the Sisters of Jesus the Good Shepherd, “Pastorelle” (SJBP).
1940-1945 (II World War) makes a vow to build a Sanctuary to Mary for the safety of all the members of the Pauline Family.
1941, 10 May – Pontifical approval of the SSP and its Constitutions.
1954, 30 November – Consecration of the Sanctuary of the Queen of Apostoles in Rome.
1957, April-May – First General Chapters of the institutes SSP, FSP, PDDM.
1959, 29 Juneo – Founds the Sisters of Mary Queen of Apostoles for vocations, “Apostoline”.
1960, April – Monthly Course of Spiritual Exercises in Ariccia (Rome) for the updating and pontifical approval of the Pauline Instititues of Consecrated Llife, aggregated to the Society of St Paul: Jesus, the Priest, St. Gabriel the Arcangel, Mary, of the Annunciation and Holy Family.
1962-1965 – Fr. Alberione participates in the II Vatican Council.
1963, 3 December – Conciliar Decree “Inter Mirifica” which consecrates the preaching with the means of social communication.
1969, 28 June – Honored by “For the Church and the Pope” from Pope Paul VI.
1969, 5 August – II General Chapter of the SSP proclaims Fr Alberione Superior General emeritus and elects to succeed him Fr Luigi Damaso Zanoni.
1971, 26 November – At 18,30 Fr. Alberione breaths his last in his room in the General House, an hour after the personal visit of the Paul VI.
1981, 4 May – Nulla osta per the Cause of his Beatification.
1996, 25 June – He is declared Venerable by John Paul II.
2003, 27 April – Fr. Alberione is declared Blessed.
This great work had been foreseen in 1918 when Fr. Alberione, addressing a small group of his first youth, inspired by the Holy Spirit, said: "Lift up your eyes, look up on high and see the great tree of which no one can see the top: this is our House, which is really a great tree (alberone); your are but the roots. In fact, the actual house is the root of this great tree. You are at the foot of a great mountain, go up, look out, the horizon is the whole world". Today, the paulines throughout the world, give thanks to the Lord for having given to His Church this tiredless apostle.
Address: Casa Generalizia
via Alessandro Severo, 56
Roma 00145
Phone: +39 065978 6000
Fax: +39 065978 6602
www.paulus.net

Fathers in the chapel of the Lviv monastery

Father Jacob Alberione during the creation of the film 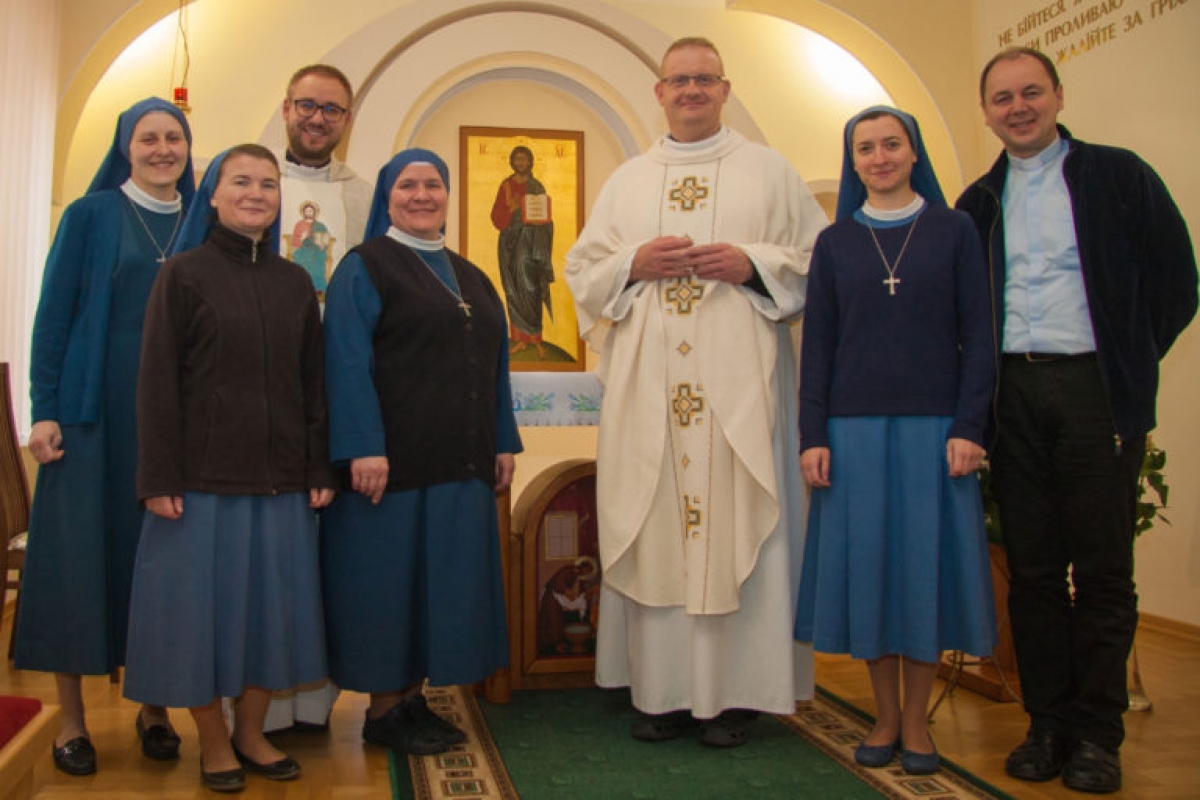