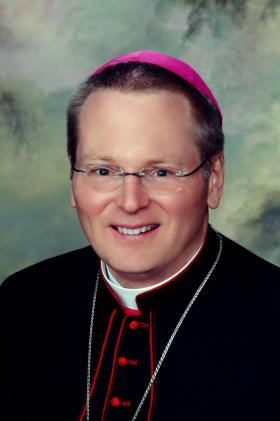 Thomas E. Gullickson was born in Sioux Falls, South Dakota, United States of America, on 14 August 1950 and ordained to the priesthood on 27 June 1976. He was ordained to the Episcopate in his hometown on November 11, 2004. He is titular Archbishop of Bomarzo.

He entered the diplomatic service of the Holy See on 1st May 1985 and has been appointed successively to the Diplomatic Missions in Rwanda, Austria, Czechoslovakia, Jerusalem, Israel and Germany.

He has a degree in Canon Law and he speaks English, Italian, French and German.

His first posting as Apostolic Nuncio was to Trinidad & Tobago, Antigua & Barbuda, Barbados, Commonwealth of the Bahamas, Commonwealth of Dominica, Grenada, Guyana, Jamaica, St. Kitts & Nevis, St. Lucia, St. Vincent and the Grenadines and the Republic of Suriname, twelve independent States in the region.

His first posting as Apostolic Delegate was to the Antilles Episcopal Conference region, comprising the English, French, with the exception of Haiti, and Dutch territories in the Caribbean, a total of twenty-two with their own governments. There are eighteen Dioceses and two Missio sui iuris, ecclesiastical entities, in the Antilles. Archbishop Gullickson is the fifth Apostolic Nuncio in this region.

On 21 May 2011, the Holy Father named him Apostolic Nuncio to Ukraine.